Everybody is a Star

I loved getting the Scholastic Book Club orders when I was in elementary school. Here is a favorite book of mine from the club from probably the fifth grade: The Greatest in Baseball. Here is another book from that same year, Baseball Stars, though this was not a Scholastic book, it was a promotion through a grocery store, I think, where each week you were able to obtain pictures for each American League team. You might say that in addition to being attracted to baseball, I was also attracted to greatness, to being a star. I am sure I imagined what that would be like to excel in the game of baseball, to have my picture in a book like that, to have a baseball card with my name and picture. The dream didn’t last very long. I wasn’t all that good at the game.
Baseball or not, there may be something in us that desires greatness, that wants to be great, that wants to be important, that wants to stand out, that wants to be a person of distinction. Martin Luther King, Jr. argued that we all have this desire and he called it the drum major instinct in one of his famous sermons.
We see such a desire evident in the Gospel of Mark, chapter nine. The disciples are arguing about who was the greatest. They sensed that in following Jesus they were part of a movement that was going to shake things up, change the world, and they wanted to be front and center, and even to stand out among Jesus’s closest followers. The tragic-comic irony in these verses is that Jesus keeps telling them that things are going to get rough, brutal, painful. World-shaping change would come, but only on the other side of sorrow and tragedy. They just didn’t get that.
They also didn’t get the meaning of “greatness,” at least Jesus’ meaning of greatness. “Whoever wants to be first must be last of all and servant of all.” Greatness, Jesus says, comes through compassion, service, caring - - - especially for the least, the move vulnerable, those without status, those unable to return the favor. That’s what children were at that time, vulnerable, without status – and we will discuss that more during Soul Kitchen at 10:45.
If greatness comes through service, through compassion, caring and love, then everyone can be great. Everyone is a star whose light can shine. We kind of like that – and we don’t. If everybody can be great, if everybody is a star, then is anybody really great, really a star? In our human capacity to turn things inside out, and not always for the better, we can even make this definition of greatness competitive. The really great are those who really serve well, who really humble themselves.
On an Ash Wednesday service, a pastor, moved by all that has happened, overwhelmed by a religious feeling, toward the end of the service kneels at the altar rail and prays, “God, before you I am nothing.” Moved by this display, and not to be outdone, the associate pastor goes to the altar rail and prays, “God, before you I am nothing.” Moved by their humility, a man a few rows back from the front of the church gets up and goes to the altar rail. “Before you God, I am nothing.” The pastor, noting this, elbows the associate pastor, and says, “Look who thinks he is nothing!”
When Jesus redefines greatness as service, I don’t think he intends to start off a new kind of competition – who can think the least about themselves most often. Now it might be nice if there were in the world a competition for compassion rather than say, for armaments, but I think Jesus’s words cut even deeper. In a culture deeply concerned for competing for power, prestige, and wealth, which was the culture of the Roman Empire, Jesus offers a profound critique. The deepest measure of our lives, the most thorough-going measure of our greatness has nothing to do with comparing ourselves to others. If caring, compassion, service and love define greatness, then the only comparison worth making is an internal comparison. Am I better today than who I was yesterday? Am I more compassionate, caring, loving, giving, than I was before? That’s the greatness question, and it takes the whole of our lives to answer it.
A long time ago, I knew I would never be great like Babe Ruth. Over the years, I have also discovered that I will not be great in the way a Martin Luther King, Jr, or a Mother Teresa are great. The greatness question for me is not whether I can be more compassionate than the Dalai Lama, but whether I can be a more compassionate David Bard today than I was yesterday, last week, last month, last year – and I don’t mean comparing myself with my son, David.
And that’s the question for you, too. You want to be great? Love, serve, care, be compassionate. Does your greatness need a little competition? Love and serve and care and be compassionate a little more today than you were yesterday. Will anyone see this and call you great? Will anyone else know about your greatness? Maybe not, but God will know, and your heart will know and grow.
A really good sermon might conclude here with a moving story about, humble, gentle quiet service. The stories are worth telling, but this week I am going to let you finish the sermon. This week, be your own sermon illustration by the greatness of your love and compassion and care. Be a star and let your light shine, even if nobody but you and God know. Amen. 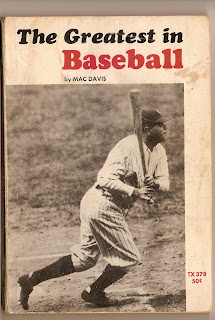 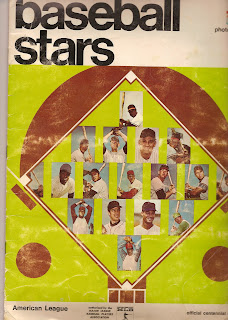 Into the Great Wide Open

Life on the Strip 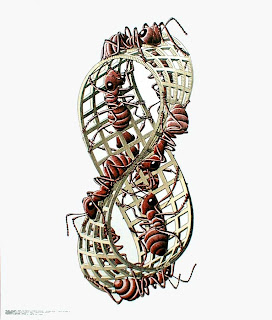 Escher, Mobius Strip
Posted by David at 10:49 PM No comments: